"The Exonerated" @ The Beck Center For The Arts 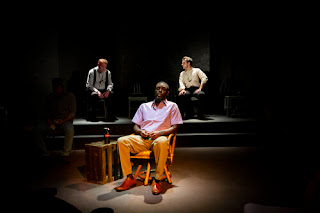 THE EXONERATED has a strong and important message.  It is one that anyone interested in civil justice should hear.  The docu-drama methodology of one speech following another relayed the idea, but didn’t make for compelling theater.

This “it could happen to anyone” drama should strike a nerve in anyone who views it. What the show lacks in visually appealing action it makes up for in content. Some will find it a bit of a yawn while others will be on the edge of their seats. It will depend on your perspective.

The Exonerated, now playing at the Beck, offers an unexpectedly compelling look at the death penalty.

Why “unexpectedly?” Because director Colleen Longshaw skillfully avoids yelling at or lecturing to the audience. Written by Jessica Blank and Erik Jensen, the docudrama presents true accounts of a half dozen wrongfully convicted individuals on death row. Listening to one speaker and then to the next, we learn about their lives, the crime they were convicted of, and the legal decisions that put them on death row. Given that execution cannot be undone and that eventually they were found innocent, their stories make a strong case for abolishing the death penalty.