THINGS AS THEY ARE @ PLAYWRIGHT"S LOCAL 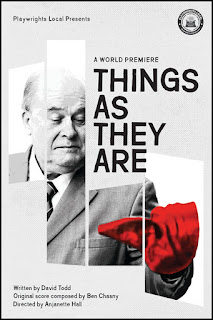 Despite director Anjanette Hall’s best efforts, it is often hard to distinguish between the playwright’s efforts to use Stevens’ abstract ideas and radiant lyricism as key elements in the storytelling and the creative choices governed by budgetary constraints or simple oversight.

As a play in process, “Things As They Are” needs to be reexamined with an eye for sharpening and tightening the dialogue and ascertaining whether all the visual and audio stimuli are necessary to tell the tale.  For those who like to see new works, to discuss and add in-put into the development process, Playwrights Local and this play offer that opportunity.

Christine Howey
Todd and Hall and their team have many ideas at work here, and their dedication to the subject matter is evident throughout. But it would all work better if the extraneous staging effects were trimmed, the audience brought in closer, and the script tightened to concentrate more on Stevens’ works.

“Things as They Are” brings audiences some wonderful things as they were.  The story moves through Wallace Stevens’ life from the poet as a young man to the mature (dying) Stevens. Jason Markouc (Young Wallace Stevens) and Robert Hawkes (Mature Wallace Stevens) are excellent in their respective roles. The script and Anjanette Hall (Director) permit the audience to watch Stevens grow and mature from a young man to a mature and then old and dying man. The character slowly modulates through life.