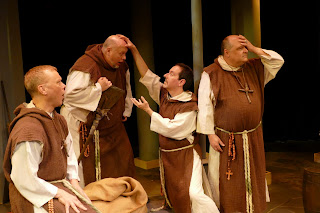 WORTH NOTING:
In order to bring attention to local productions of merit at theaters that are not on the Cleveland Critics Circle’s approved list, members of the Circle who attend a community or educational theater production that is perceived as of high quality will have the option of listing that production on the CCC blogsite.  This review falls into that category.

Dark Ages Catholicism is not often associated with anything remotely comical.  But thanks to Michael Hollinger’s clever 1996 farce “Incorruptible,” that comedic gap has been bridged and Clague Playhouse’s current production of the show, directed by Tyson Douglas Rand, is something of a blessing.


Billed as a dark comedy (with more emphasis on the former than the latter)…“that will have audiences asking for mercy while rolling in the aisles with laughter” simply did not deliver as promised on opening night. Hopefully as the cast gets a show or two under their belts the comedic timing will sharpen up and the show will become the promised potential laugh riot.