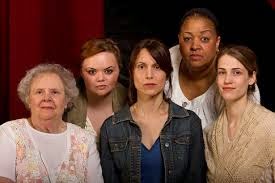 
The intersection of art and politics is often ungainly.  Some playwrights merely teeter on the periphery of hot and hard topics, thoughtfully contemplating issues but never getting close to the root of the problem.  Others’ efforts to inspire self-reflection, generate public awareness, or instigate social change through storytelling turn preachy, pedantic and off-putting.

“Ancestra” is a well written play that gets an excellent production at Cleveland Public Theatre.  It is a story that needs to be told.  It should be seen by everyone who assumes that the rights movements…the march for equality for women, blacks and homosexuals, have completed their tasks.  Kudos!


To see a full review of this show, read Roy Berko's blog here.


“Ancestra” is a historical drama with a profound modern twist.  It reaffirms the thought that freedom for all is a basic human right and no one is free until all are free.  See this one with your wife or husband and talk about it afterwards.

There’s plenty of righteous anger in Ancestra, and that’s a damn fine thing.  However, the play often sounds like compendium of Wikipedia entries, spewing a litany of anti-woman issues only occasionally tethering them to personal stories and felt consequences.

If all a production needed were earnestness and topicality, "Ancestra," a new play from Cleveland Public Theatre about the silencing of female voices, past and present, would be a real hit.  But a righteous topic alone does not a fine piece of theater make, and, despite a gorgeous set by Cleveland State University's Aaron Benson, the work amounts to two soggy hours of missed opportunities.