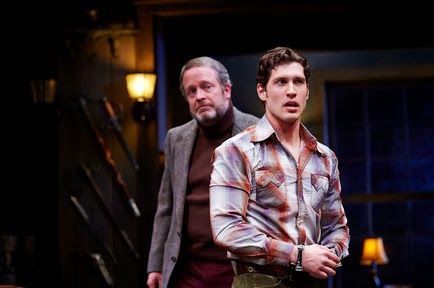 
“Pain!!!!” screeches Helga, the Scandinavian psychic in Ira Levin’s “Deathtrap,” as she enters the stage and senses murder most foul.  But pleasure is the only emotion emanating from the audience during this wonderful Great Lakes Theater production of Broadway’s longest running play-within-a-play-within-a-comedy thriller.

“DEATHTRAP” is a fun mystery filled with plausible twists and turns that incites the curiosity of the audience in their attempt to figure out what’s going to happen next. The GLT’s production, under the direction of Charles Fee, brings out the best in the script and is a must-see for anyone interested in a delightful escapist theater experience.

Great Lakes production shines best visually with the fetching, rich country house set by designer Russel Metheny. It's riddled with character, theatricality and all sorts of deliciously portentous details.  Great Lake's Theater's energetic artistic director Charles Fee certainly delivers the goods, shock wise -- although neither he nor the hard-working cast manage  elevate Levin's utilitarian dialogue and sketchy characterizations.  But that doesn't seem to matter to most of the shrieking audience members.


This show has more twists and turns than a horseshoe shaped corkscrew.  Whether or not you have seen this work in any form, the Great Lakes Theater production of “Deathtrap” will still thrill you with its superb acting and finely tuned dramatic surprises.  If you have not been shocked lately (in a good way), a great experience awaits you at the Hanna Theatre.
To see a full review of this show, read Mark Horning's blog.

Levin didn't build a perfect, foolproof mousetrap. But it is an insanely entertaining one, and Charles Fee and company gleefully execute Levin's crafty script. The games begin with a "Telltale Heart" ker-thump, ker-thump, ker-thump from sound designer Richard B. Ingraham, an ominous soundtrack that opens the show.

Even forty years after its premiere, "Deathtrap" delivers almost equal parts thrills and laughs. The brilliantly crafted script by Ira Levin is secure in Charlie Fee's ensemble cast. Comedic digs at producers and critics sit comfortably with sexual tension and scarey movie music. A genuine hoot and a holler.