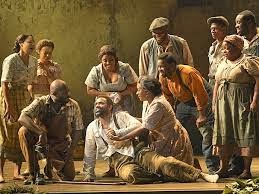 
Despite all the nay-saying from traditionalists and composer Stephen Sondheim’s dismissal of the work in the pages of The New York Times, the musical being performed on the Palace Theatre stage is an immediately accessible, thoroughly enjoyable piece of epic entertainment. And the tour, which launched in November, has lost none of its vibrancy or intensity.

For those concerned because some touring companies aren’t as good or the productions as grand as Broadway shows, worry not with the road performance of THE GERSHWINS’ PORGY AND BESS.  It is, as its title says, “The Broadway Musical.”  For anyone who wants to see and hear a fine staging of a very important classic, this is it!

The musical version of the Gershwin opera, which runs through Feb. 16 at PlayhouseSquare’s Palace Theatre, is an emotional, musically ravishing production that not only does justice to the original masterpiece, but also makes its story and characterizations more vivid.

It feels very much like the director, the highly regarded Diane Paulus, has unnecessarily constrained her actors with results, and not leaving them free to discover. The struggle to crawl, crippled, into the freedom of a new life drives this play. In the end we are left feeling like something precious has been mislaid. And the great promise of the Palace Theatre has let us down.

To see the entire review of this show go to http://www.clevescene.com/cleveland/promise-unfulfilled-actors-raise-porgy-and-bess-on-high-though-story-and-direction-fall-flat/Content?oid=3781451  http://www.clevescene.com/cleveland/promise-unfulfilled-actors-raise-porgy-and-bess-on-high-though-story-and-direction-fall-flat/Content?oid=3781451


There really are no words worthy of describing this production… fantabulouslyderful comes close.  Great songs sung by truly great operatic singers on a well appointed stage set accompanied by a stupendous orchestra makes this a true entertainment bargain.  Immerse yourself in the spirit of Catfish Row.  This show is, “where the livin’ is easy”.
To see a full review of this show, read Mark Horning's blog.

Live theater, especially musical theater, moves so quickly, scenes tend to merge into an impressionistic blur. But director Diane Paulus, in her triumphant reimagining of the classic opera, is a grabber of lapels. "Hold on," she seems to say – "really watch this."

This is an important production of an important work. Sensibly shortened for contemporary sensibilities, the remarkable capture of Black culture by the Gershwins perfectly melds musical theater with opera. You'll not hear a better cast sing this show and the dramaturgy is suited for the huge Palace Theater stage.