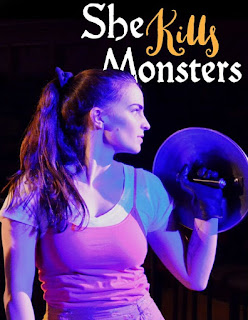 This play about teens and young adults has a script with some truly juvenile dialogue, including crude language from teen characters playing fantasy roles. That could play as comical, but I wasn’t feeling any big belly laughs at Sunday’s show. “She Kills Monsters,” which premiered Off-Off Broadway, may just be too much of a niche show that appeals mainly to D&D lovers. ... Fight director Ryan Zarecki has choreographed fight after fight in this show as the team must slay several “bosses” to find the lost soul of Athens, Ohio. There’s quite a bit of floor work but too often, female warriors look like they’re lying and waiting for their next fight cue.

To see a full review of this show, read Kerry Clawson's review at https://www.beaconjournal.com/topics/clawson.