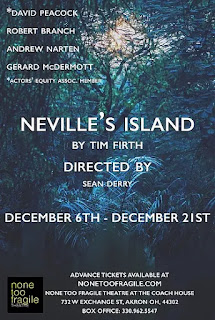 "Neville’s Island” is kind of like “Lord of the Flies,” the middle-aged version. In this comedy, playwright Tim Firth explores how quickly human beings’ sanity can devolve when fear and panic start to take over.

Sean Derry directs an excellent cast of four men at None Too Fragile in this British show, which premiered in Scarborough, England, in 1992, moved to the West End in 1994 and made its North American premiere in 1996 in Sante Fe, New Mexico. The play, which offers an incisive look into the human condition through four very different personalities, is written by the same man who co-wrote the films “Calendar Girls” and “Kinky Boots.”