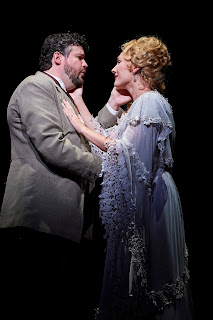 
The tears start welling up right about the time the pale apparition of Lily Craven makes her entrance early in Great Lakes Theater’s absolutely gorgeous telling of “The Secret Garden.”  They’re welling up still.

Victoria Bussert, her technical crew and the cast join their skills
to make the Great Lakes production of THE SECRET GARDEN a very special theatrical offering.  This is a show that deserves the standing ovation that it should get after each performance.  Bravo!


It can be a real challenge putting on a show as well known and as well liked as The Secret Garden especially as a musical but Great Lakes Theater pulls it off with aplomb.  The singing is magnificent, the costumes breathtaking and the easy to follow moral tale of loss and redemption rings clear as the wonderful voices of the cast.  Take the entire family to see this one (if you can get tickets).  This is a spectacular way to start the GLT season.

Let’s just get this out of the way: “The Secret Garden” is majestic, magical, meaningful and melodious as superbly rendered by the Great Lakes Theater company at the Hanna Theatre on Playhouse Square.   The concept by librettist and lyricist Marsha Norman is to move the original work well beyond a Shirley Temple movie.

While the material itself can get on some nerves, the performances under the direction of Bussert are blameless.

Witnessing such a moment teaches that sometimes live theatre can offer the very gift Mary gave her family--a cure for soul sickness, a spiritual lift that banishes grief, if only for two transporting hours.

To see a full review of this show, read Andrea Simakis' blog or visit Cleveland.com here

I'm not a fan of this show, but you'll never have to see another production of  it after experiencing the spot on cast who carry off the music with  boundless energy. Opening with death by cholera and ending with floral theatrical drops, "The Secret Garden" is less typical than most and refreshing in its musical innovations.