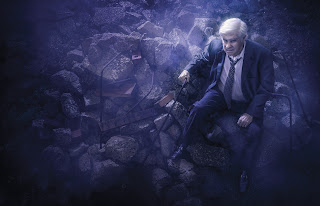 As he emerges from prison carrying Cordelia’s body, Lear howls in despair ranting, “heaven’s vault should crack” because of his daughter’s death. It does not, and are we left with no answers.  It is this lack of unexplained horror that makes KING LEAR such a powerful, maybe even excruciating play, and a classic example of Shakespeare at his finest.  Joseph Hanreddy, his cast and crew make this a fine GLT offering.
To see a full review of this show, read Roy Berko's blog here.

There is much to admire in this staging of King Lear by Great Lakes Theater, including some incisive performances under the direction of Joseph Hanreddy and a scenic design that falls into a state of decrepitude right alongside the King's.

There is a "Man Max" quality to the electrifying Great Lakes Theater production of "King Lear" at the Hanna Theatre, a grungy, post-apocalyptic feel that is only heightened as the play speeds toward its dark denouement like a killer meteor hutrling to Earth.

The straightforward story of Lear's descent into madness is clear in this iteration which is surprisingly traditional despite the contemporary costuming. The production has a lot of bells and whistles, making it probably the nosiest production of "Lear" you will ever see.