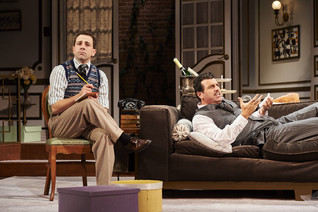 Sometimes, whether through divine intervention or the heights of human inspiration, art is elevated to a higher level and becomes transcendent.  Evidence of this can be found in the masterworks of Monet, Mozart, Michelangelo and, now, Ludwig.
To see a full review of this show, read Bob Abelman's CJN article here.

Ah, what a night at CPH.  The viewing of their well-deserved Tony, a Ken Ludwig farce which will forever be listed as having had its world premiere beside the PlayhouseSquare chandelier, was a class act celebration of the theatre’s one- hundredth anniversary.  As for the play, if the opening night audience’s reaction is an indication of things to come, Ludwig should be well- off financially from the royalties to be garnered from the professional and amateur rights to the show.  If you love farce, if you go to the theater to have a good time, you must see A COMEDY OF TENORS.


Playwright Ken Ludwig has hit the jackpot again with his fast-paced, over-the-top farce 'A Comedy of Tenors,' which builds on the zany characters he introduced in his beloved 1986 comedy Lend Me a Tenor.

In this all important opening of the 100th season of Tony Award Winning Cleveland Play House, no finer choice could be made than to hold the world premiere of Ken Ludwig’s “A Comedy of Tenors.”  With a formidable and energetic cast, great staging and costumes, this mad cap 30s style comedy is a laugh riot of the highest degree.  Share the laughter with all of your friends and family but get your tickets early as this one will prove to be a sell-out.  No love of opera required.
To see a full review of this show, read Mark Horning's blog.

Congratulations to the Cleveland Play House on their 100th anniversary! As for the show that's kicking off this milestone season...well...

There are moments of true inventiveness and delight – real, organic, lapel-grabbers that make you hungry for more – but they are too few and far between to deliver the rollicking ride a successful comedy demands.

Good contemporary farce is a rarity and master playwright Ken Ludwig wisely sets this show in an earlier time in France. The Play House cast are impeccably chosen and do the play justice. It will be remembered as a landmark production in Cleveland.