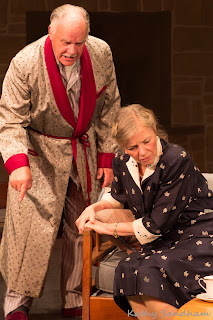 
Two reasons to see Horton Foote’s “The Young Man From Atlanta,” currently on stage at the Beck Center, are the remarkable performances by Dudley Swetland and Anne McEvoy.   But these may be the only reasons.  Like the never-seen title character in this 1995 Pulitzer Prize-winning drama, much of what is enticing on the page never shows up on the stage.

Though THE YOUNG MAN FROM ATLANTA was awarded a Pulitzer Prize, potential viewers should not expect to see an epic play.  The tale is a 1950s tale which reflects the era and southern attitudes of the day.  The production values reflect Foote’s writing style and gets his message across.


In short, these are the neighbors that Ozzie and Harriet would never invite to their house.  While you do not wish to dislike Will, Lily Dale and the rest of the Hee Haw Gang, they are hard people to enjoy in company.  Add to this that the show is in effect a staged production of “Groundhog Day” where the same lines are recycled over and over.  It makes more for an evening of endurance rather than pleasurable viewing.


Playwright Foote leaves many questions unanswered in this play. And that is just dandy, since the mysteries and secrets at work in this family create a riptide that threatens to sweep all the characters out to sea. But Schmiedl's direction, while compassionate and skillful, doesn't provide this material the motive force to make the unseen threats palpable.
To see a full review of this show, read Christine Howey's review at  Cleveland Scene

One of the more literate plays you'll see this year, this production does a good job of keeping much subtext well below the surface while the characters all act selfishly coping with a "sugar daddy" who has lost his job, as well as his son in an apparent suicide. The show is filled with issues that dominated life in the middle of the last century.