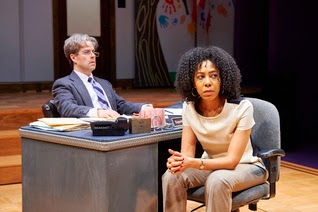 
Some playwrights inadvertently insult their audiences by talking down to them as if they were children.  In Eric Coble’s delightful comedy “Fairfield,” the playwright intentionally treats us like actual first graders so we have the most intriguing vantage point from which to view adults behaving badly. The result is a hilarious and increasingly outrageous exploration of the current state of race relations in America.


Filled with edu-speak, sexual innuendos, derogatory terms, mild violence, frank conversations about race, and clever lines, the script is a laugh riot.  The production milks every possible laugh from Eric Coble’s premise and writing.  Because of the Outcalt’s thrust seating, the action was up close to each audience member, added to the high level emotional impact.  FAIRFIELD is a production absolutely not to be missed and makes a wonderful curtain-raiser for the NEW. THEATRE. FESTIVAL.


If you are truly into seeing the folly of being “too correct” and the consequences it brings, this is the show for you.  It is comedy with heart and great comedy at that.  Bring a conservative friend and you will be guaranteed a lively discussion afterwards.

Christine HoweyPlaywright Coble is intelligent and clever, and the talented cast under the direction of Laura Kepley delivers this comedy with vigor. But because Coble can't quell his instinct to go for big laughs that defy character logic, the ultimate takeaway from this play is less than one might desire, given its subject matter.To see a full review of this show, read Christine Howey's review at  Cleveland Scene

Now in a full-fledged production directed by Laura Kepley, it's still laugh-out loud funny, but something has been lost in translation, the very opposite of what you'd hope would happen in the migration from page to stage.

To create a farce whose subject matter is racism in a primary school is a daunting goal. Coble's show is filled with both witty and guffaw producing dialogue. The actors deftly sell the characters. Still, this world premiere needs some script tweaking before its next incarnation.