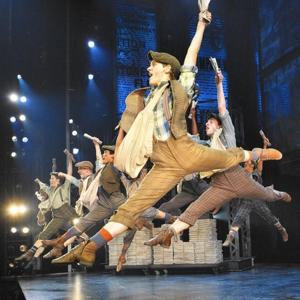 
The Disney-produced Broadway musical is a performing arts paradox – it collectively raises casual theater audiences’ entertainment expectations while lowering their standards.  Disney productions like "Newsies" are eye-catching, toe-tapping and crowd-pleasing, but they are hardly thought-provoking.  Admittedly, it feels good to leave your brain at the stage door and enjoy a good paradox upon occasion.

Stop the presses! Newsies, whose North American tour just landed in Cleveland, is a high-spirited musical full of old-style charm, thanks to a bunch of wonderfully charismatic young men who bring the story’s scrappy underdogs to life.

To see a full review of this show, read Kerry Clawson's review at http://www.ohio.com/entertainment/kerry-clawson.


“Newsies” is a paint-by-the-numbers Broadway blast of big broad brush strokes. Whereas other shows may try for subtlety and nuance, “Newsies” remains in a constant flux of musical anthems, backflips and youthful male bravura — made-to-order for swooning pre-teen girls in the audience. Well, what else would one expect from Disney on Broadway?


This is the show that is pure fun theatrical escapism.  For nearly two and a half hours you can root for the good guys, boo the baddies and in the end go home feeling satisfied that everything has a happy ending…in other words, typical Disney.  This is a great show to take the family for a night of entertainment if you can get a ticket to it.

Make no mistake:  This is a broad, elecgric song-and-dance exgravaganza.  It is not, despite the presence of gifted book writer Harvey Fierstein, a piece of subtle storytelliong.  It shouldn't work, but it does.

The much-awaited production of  this show is even more spectacular because Cleveland is the first stop on its national tour. There's more energy in this show that even the promo videos can show. The sad news is that by this time few if any tickets will be available for the two week run.