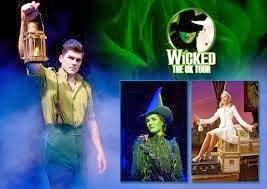 
On its first visit to Cleveland in 2006, audiences may well have been attracted to "Wicked" because of its "Wizard of Oz" connection. But considering that Dorothy’s appearance is limited to an in-joke and a sight gag, returning customers are most likely drawn to the show's Grammy Award-winning music and Tony Award-winning performances and production values. This company -- representing "Wicked's" fourth visit to PlayhouSquare -- captures the grandeur and offers the same Broadway-tested talent as the original New York production... plus Cleveland's own Alex Wyse.

When asked what I should write in my capsule judgement Alex (the kid reviewer) said, with enthusiasm, “Tell them if they didn’t see WICKED yet, go see this show!  If they did see it before, “Go see it again, it’s that good!” Grandpa totally agrees!!!!


A sold-out house Friday night at PlayhouseSquare’s State Theatre ate up the return of the mega-hit musical WICKED, which landed in Cleveland for the fourth time, just in time for a monthlong holiday run.


... audiences are obviously hungry for more of the show’s thrilling theatrics, fabulous singing, ingenious staging and brilliant costumes.
Jennifer DiNoia is an incredible vocal powerhouse and potent actress as Elphaba, the ultimate outsider who’s really just a misunderstood, highly intelligent girl. Hayley Podschun is delightfully ditzy as the beautiful but spoiled Glinda, creating a bit of an edge to the character that makes the story believable when Glinda’s eyes begin to be opened to the mistreatment and prejudice around her.


“Wicked” now playing in the State Theatre at PlayhouseSquare is a delightful coming of age tale that gives you the back story to one of our most treasured movies, “The Wizard of Oz”.  It combines music, costumes, acting, singing, dancing and magic in a swirling dazzlement of colors and sound that will excite all the senses.  This is one you should not miss.

Consider the reach of “Wicked’s” spell: Not only are there two companies currently touring America – one of which flew into Cleveland airspace this week, where it will hover through Sunday, Jan. 5 – but also productions in London; Tokyo; Auckland, New Zealand; Seoul, South Korea; and Mexico City. “Wicked” has grossed more than $3.1 billion worldwide.