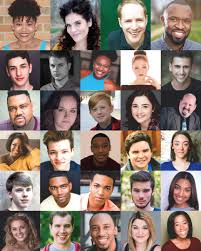 
To see a full review of this show, read Bob Abelman's blog here or go to:  www.clevelandjewishnews.com/columnists/bob_abelman/

“Ragtime” tells an important tale that needs to be seen and heard.   Except for an over-enthusiastic orchestra and some audio balance problems, this production does the script justice.  It’s well worth the sit!

The swiftly-moving Ragtime: The Musical, now at Cain Park’s Alma Theater, gives a musical snapshot of early 1900s in New York City. Based on E. L. Doctorow’s fine and dramatic novel with the same name, it features book by Terrence McNally, music by Stephen Flaherty and lyrics by Lynn Ahrens. The Cain Park production,  directed by Joanna May Cullinan, pays appropriate homage to the classic America-as-melting-pot narrative (at least to the New York City, East Coast  version).