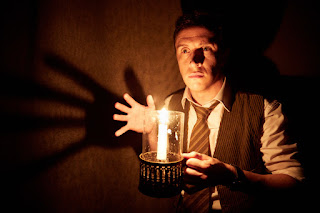 
The hardest audience to please with a two-handed, one set ghost story like “The Woman in Black” is the seasoned theatergoer just coming off of a “Hamilton” high.  Pleased they will be, for it is impossible not to marvel at Armacost and Brown’s detailed and always interesting performances and the finely tuned storytelling that surrounds them.

At this pre-Halloween season “The Woman in Black” appears to have been a good choice.  The success of this type of play is dependent upon the audience using its imagination, and the moments of shock-induced terror and the jumpy, scream-induced moments.  These, unfortunately, are somewhat missing in this production.

This play, which is definitely not a parody although it seems like one, has been a big hit in London for the past 30 years, which explains a lot about the British, who made Benny Hill a star.

The actors are a delight, always convincing. But there’s something a bit too genteel at times. It’s hard to scare an audience used to film horror, a genre which seems to outdo itself every year with zombies, heaps of gore, and psychopathic characters.

BOTTOM LINE: Not as scary as current horror films, but a beautifully acted, super-British piece (that means, its hauntings and threats of ghostly retaliations are extremely subtle). Maybe that’s enough.

Like all good ghost stories, "The Woman in Black" follows you long after your leave the theater, up the stairs and into your bedroom crouching in the dark corners of your imagination, waiting for just the right moment to spring.