AN ACT OF GOD @ Beck Center for the Arts 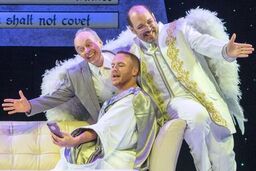 
To see a full review of this show, read Bob Abelman's article here or go to www.clevelandjewishnews.com/columnists/bob_abelman/


“Act of God” is one of those funny, funny irreverent scripts that, while it may offend some, gets a no–holds-barred, must see fine production at Beck Center for the Arts.  You’ll be upset or leave with a smile on your face respecting a writer who can come up with a clever way to confront the ills of the world in a humorous way.

There are lots of laughs to be had in this production, especially if you lean left politically. If you lean right, I guess you’ll have to wait until Dennis Miller writes his version of An Act of God.

Mike Polk, Jr.  is God? Well, that’s his designation in the Beck Center’s irreverent incarnation. Directed by William Roudebush, this regional premiere features a script by David Javerbaum. The snarky, hip vibe featured in An Act of God may sound familiar to stand-up comedy fans and those who love The Daily Show with Jon Stewart. That’s no accident; Javerbaum writes for the show.