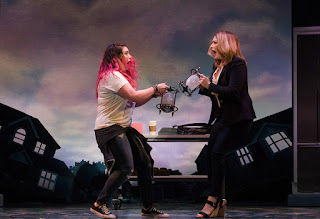 The new Disney musical 'Freaky Friday' is a fun and fluffy time, but a work of art it’s not. The musical at Cleveland Play House is a contemporary spin on the original 1972 novel by Mary Rodgers as well as the 1976 and 2003 Disney movies.

It’s a medium-speed musical whose numerous attributes (and few limitations) can succinctly be summed up by the name above the title — Disney. With sets by Beowulf Boritt and costumes by Emily Rebholz, the production has the feel and scope of one of those downsized extravaganzas on an ocean cruise.   Fortunately, although the show rarely soars, there doesn’t seem to be many kinks to work out — certainly not with an intelligent and strong turn by Emma Hunton as teen daughter Ellie, nor with the powerhouse, stand-up-and-cheer performance by Heidi Blickenstaff  as the mom-turned-teen.  Come to think of it, she’s the closest “Freaky Friday” gets to soaring.

For those looking for a family safe and suitable show that entertains and delights, this is the one to see. With a well developed cast, functional sets, believable costuming and a number of dazzling song and dance numbers it is an evening of solid entertainment wrapped up in a nice moral tale with a happy ending.

Never mind “being in someone else’s shoes.” How about exchanging bodies? That’s the premise of Freaky Friday, the Cleveland Play House’s last show of the 2016-2017 season. This Disney pop/rock theatrical production takes a light look at the common “You just don’t understand” wail that often comes from both mothers and daughters.  After Disney movies plus TV shows based on the idea (and in this musical’s case, specifically on Mary Rodger’s novel, Freaky Friday), the comic story itself won’t surprise.