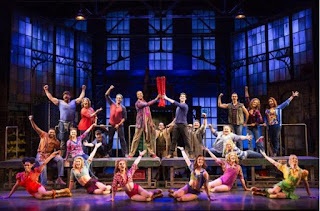 
The other shoe drops as touring ‘Kinky Boots’ triumphantly returns.

KINKY BOOTS is the kind of musical that seeing it once is just not enough. (I’ve seen it three times and look forward to more!)  The music, the story line, the humor, the stage excitement makes this a very, very special theatrical experience.  This touring production of the show is as good as the last one through town and rivals the Broadway show.  This is one staging that deserves a standing ovation, not just the automatic polite Cleveland one, but a real, well-earned one.  Go!

In the dog days of summer, as the theater scene starts to make way for the fall, it’s hard to imagine Playhouse Square has any kick left.   But thanks to a great touring company of “Kinky Boots,” returning to the Connor Palace this week, that kick is high and mighty — and mighty sparkly and fabulous as well.


At the end of this return touring production of Kinky Boots the audience leapt to its feet in appreciation.  You will do the same.  Tickets may be scarce for this show in its limited run.

Kinky Boots has romped and stomped back on tour to Cleveland. Second time around may be best – or at least gives us a little time to think about this Tony-winning show.  A good script shows the audience a change in characters.