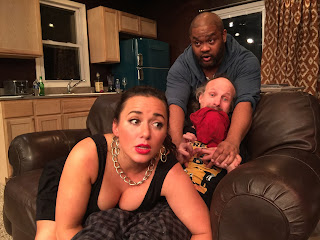 
There is certainly no shortage of satires of the Hollywood industry, but none do it with comedy that is blacker or more profane than Matt Pelfrey’s “Pure Shock Value,” a little-traveled, fringe-festival favorite written in 2009. And it is safe to say that few will do it better than none too fragile theater in Akron.
To see a full review of this show, read Bob Abelman's CJN article here.

Though the production values are fairly high PURE SHOCK VALUE is an absurdist script that will confound many, offend some due to the language and sexual actions, and please others due to its gutsy ”in your face telling it like it is.”

Disclaimer: No Hollywood wannabes were killed in the making of the extreme black comedy PURE SHOCK VALUE at None Too Fragile Theater.  Set in Hollywood, playwright Matt Pelfrey’s 2009 satire of Tinseltown greed focuses on three young, desperate characters trying to break into the business. ... The audience went wild on opening night Friday, yelling out to characters as Pelfrey’s insanely funny story unfolded. Director Sean Derry’s talented cast of four dove fearlessly into the play’s completely over-the-top language and absurd sexual and violent situations.

Pelfrey’s quicksilver dialogue and Sean Derry’s fearless direction keep this manic, frequently hilarious, and often too-predictable comedy afloat just long enough to arrive at an ending that will leave you tumescent with joy…or limp from shock.

The production earns its guilty laughs - and they come with laxative-like frequency - thanks to the exquisite timing of a cast able to deliver rapid-fire dialogue laced with insider allusions, movie references and a cluelessness that only the entitled but undeserving share...