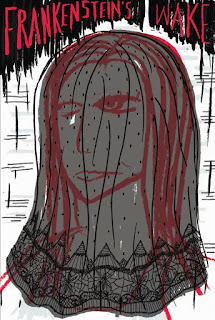 Raymond Bobgan, the director and the piece’s co-creator, concludes his program remarks by stating, “Perhaps, on this stage, we will reform the image of the monster made by humanity.”  Whether he and Holly Holsinger have done so depends on whether audience members are capable of grasping the duo’s intent and purpose.  Doing so is a challenge, but can be worth the effort.

For those wishing to discover the true and unblemished story concerning Victor Frankenstein and his “daemon” creations,” Holly Holsinger gives an astoundingly honest portrayal of all the characters involved in what is considered the very first “science fiction” work.  With just over fifty seats available for each performance you would be advised to reserve your places early.  This is a work designed for those who like to think and are not influenced by the Hollywoodized versions of a classic morality tale.
To see a full review of this show, read Mark Horning's blog.

As the only performer, Holsinger uses her supple voice and gloriously specific, intention-driven movement to captivate the audience.
To see a full review of this show, read Christine Howey's blog Rave and Pan