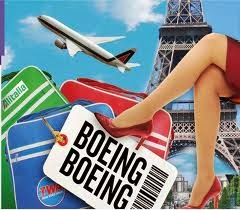 BOEING-BOEING is a light-weight farce that receives what should be an audience pleasing production at Lakeland Community Theatre.

Farce, with its pratfalls, pummeling, slamming doors and split-second timing is pure physical theater and fiendishly difficult to pull off.
The production at Lakeland Civic Theatre does not induce paroxysms of laughter, but it holds its own, gathering comic steam in the second act after a sluggish takeoff in the first.

Once you accept the show’s premise as a charming anachronism, the stage is set for lots of door-slamming hijinks. And that does happen at times.  But the over-long and repetitive script, as translated by Beverly Cross and Francis Evans, eventually wrings a lot of the humor out of what should have been a sprightly romp.