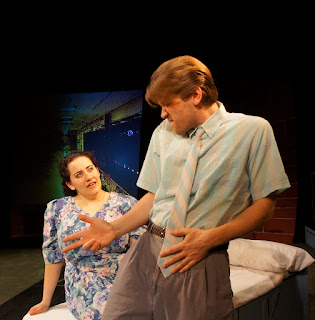 Much like Rajiv Joseph’s ”Bengal Tiger at the Baghdad Zoo,” a 2010 Pulitzer Prize finalist that takes place during the Gulf War, the two characters in “Gruesome Playground Injuries” are trapped within their own personal cages.  And while the Gulf war serves as a powerful reminder of the self-destructive nature of the human animal—a nature from which there is no clear or viable release—nothing drives this point home any better or more dramatically than watching Doug (Dan Folino) and Kayleen (Celeste Cosentino) attempt to escape their ill-fated, accident-prone destinies.