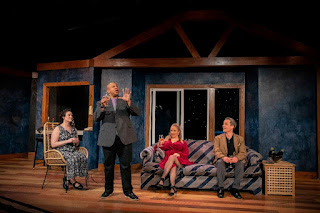 One can only wonder why Beck chose to do this play.  As a Broadway reviewer said, “METEOR SHOWER is a train wreck.”  Fortunately, the quality of this production exceeded the quality of the script.

Director Scott Spence has assembled an entertaining cast, and he has done his best to showcase the strengths of the play; the satire, the absurdity and the silliness. Unfortunately, the plot itself, along with the actual development of the characters, is ultimately too weak and disjointed to ignore.

To see a full review of this show, read Sheri Gross' review here.

If you are a fan of absurdist theatre (such stuff as “Waiting For Godot”, “End Game”, “Rhinoceros” and such) then this show is right up your dark and twisty alley. While some will find the show deeply disturbing others will heap praise. It really depends on which side of the tea cup you sip your beverage from.

In the regional premiere of Steve Martin’s Meteor Shower at the Beck Center, reality flies out the window as humor takes over. Yes, the author is that Steve Martin, so if his comedy style suits you (confession here — I am a fan) then you’ll love the show.

Directed by Scott Spence, this 90-minute, no-intermission comic satire set in the Studio Theatre races from surprise to surprise. What is satirized? Marriage, therapy, the cosmos, mystical thinking, sex — you get the idea — nothing is sacred, but it is all done in such a well-mannered sort of way that when shocking things happen, we are still a bit surprised.