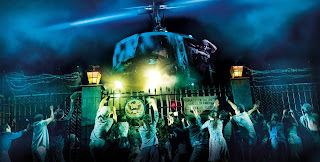 
“Miss Saigon” is a powerful piece of musical theater, with a vital story and soaring music.  It tells a tale of historical significance, not sugarcoating the conflict, the effect of the presence of American GI’s on the Vietnamese population, and the human chaos that was left behind.   The impressive touring production was hampered by an overly loud sound system which had the orchestra drowning out the singers and direction, which resulted in overblown chaos in almost every scene.

Everything about this production is magnificently larger than life, from its dramatic love story to its massive score, gorgeous sets, bold staging and over-the-top sleaziness of the Engineer character.

With slightly less scenic gimmickry and a bit more definition in musicality and dramatics, the revival production comes across much more emotionally satisfying and engaging. Yes, Broadway has grown smarter technologically as well as theatrically since the days of the Broadway dinosaur.

Miss Saigon, that tale of war and woe, is back in Cleveland after all these years. The KeyBank Broadway Series musical, directed by Laurence Connor, offers a slightly reworked version of the first national tour that played here in 1992.  Although the show lacks a hummable score and relies too heavily on sung dialogue, it does succeed in adding a human face to the horror that was the Vietnam War. Its focus is on the fall of Saigon in 1975 when the Viet Cong took the city and the exodus of South Vietnamese troops and the U.S. military turned into panic-fueled chaos.

What I'll remember of the re-imagined "Miss Saigon" is Kim, almost spectral in white, riding the shoulders of a crowd trying to breach the gates of the American Embassy, her arms reaching out, and finding nothing.