IN THE BLOOD @ CONVERGENCE CONTINUUM 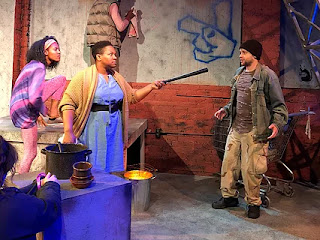 Suzan-Lori Parks’ play rages acerbically, articulately and without subtlety against a system that grinds women down, and feels as vital and urgent today as when Hawthorne’s novel was first released.  This con-con production captures all this and makes for an intriguing and thought-provoking evening of theater.

To see a full review of this show, read Bob Abelman's posting at

While one would hope that this situation is not a reality anywhere in the world, the truth is there are probably more cases such as these then we would wish to admit. It is a morality play that begs us to face the truth and to begin some dialog that would result in the end of such needless suffering. Not an easy play to watch but one that must be seen.


Christine Howey
In the Blood is a play that is as powerful and instructive now as it was when it opened. And that’s a sad commentary on where we are now—living under that metaphorical bridge and hopping it doesn’t collapse on us.