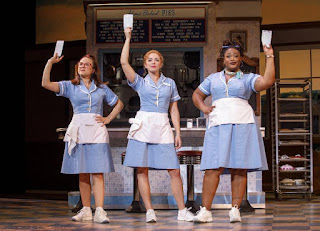 Order up: Touring ‘Waitress’ a blue-plate special with a side of extraordinary.

The quality of the music, the staging, the performances and the story line of “Waitress” assure that it will delight audiences as it traverses the country.  It’s a must see for anyone who loves musical theater at its creative best.


It must have been daunting for the producers to open “Waitress” during the same Broadway season as the runaway sensation “Hamilton,” but this modest confection nevertheless proved itself a piping hot hit, still running on Broadway and launching a national tour that began last week in Cleveland.  This production — created and directed completely by women — may be too cerebral to call “easy as pie” but the audience will certainly want to savor it as if it were.

This is a well told story with tailor made songs that while not memorable will leave you with a pleasing overall effect to ride home with. There is drama, romance, comedy, suspense and pathos all carefully mixed together. It is in short sugar and spice and a perfect recipe for an enjoyable night out at the theater.

As directed by the esteemed Diane Paulus, this show is sweet but never saccharine and it goes down real smooth. If I were Jenna, I’d call it “The ‘You’ll Laugh, You’ll Cry, You’ll Sigh with Delight’ Pie.” Yum.

This finely-crafted show in the Connor Palace opens the national tour of the Broadway hit that’s still playing in NYC. We may be in Cleveland, but we might as well be in New York as far as cast, sets, and performances go. “Waitress” revels in a slickly presented and sassy mix, blending song, great sets, recipes for imaginary pies, dancing, and sex into a sprightly musical event.

'Waitress' serves up a delicious slice of life in all its messy, complicated beauty.