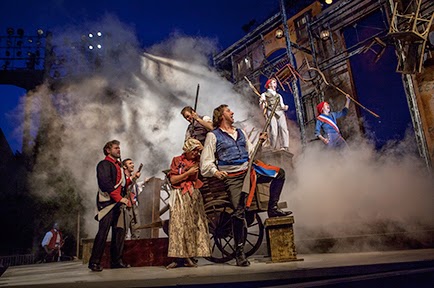 Is there a person left on earth who has not yet heard the people sing, singing the song of angry men?   “Les Misérables” has played over 48,000 professional performances and reached over 70 million people in over 40 countries, including two U.S. national tours that swept through Cleveland in 2011 and again in 2013. The question is not who has not yet heard the people sing; the question is whether it is worth hearing again in its current incarnation by Great Lakes Theater.  The answer is yes. Yes it is.

Director Victoria Bussert and her production team fashioned  a marvelous and impressive “Les Misérables.” Besides the quality of staging, it’s worth seeing the show, to experience Stephen Mitchell Brown’s ownership of the difficult role of Jean Valjean. The GLT production is an absolutely must see!

Stephen Mitchell Brown is on fire as Jean Valjean in Great Lakes Theater’s production of 'Les Misérables', which captivatingly brings to life the epic sweep of Victor Hugo’s 1862 tale of the downtrodden and unjustly treated.

As recent productions of the 34-year-old-musical have proved, less is more — but not too much less.
... Of course, it doesn’t hurt that the huge cast (by regional-theater standards) is exceptionally good — rising to the occasion of star turns and ensemble synergy.


This epic big stage production still packs a mighty punch even when done in a smaller venue.  Emotions run high as audience members realize that they are being witness to Cleveland Theater history.  Word of mouth will surely have this show become a sellout throughout its run.  It is great beyond description.  This is theater that will change you for the better.  See it!
To see a full review of this show, read Mark Horning's blog.

The intimate setting of the Hanna Theatre puts the emotions of the passion driven characters right into the laps of the audience as they sing and talk to you. Combine that dynamic with a first rate cast and high production values. This is my favorite production of "Les Mis" and I've seen five.
And GLT has finally solved the sound issues of past musicals in the space.