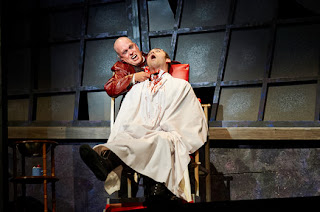 
Director Victoria Bussert’s approach to “Sweeney Todd” is to accentuate all that is theatrical in this play and go for the melodramatic.  And why not.  She has at her disposal a classically trained resident company capable of mastering Shakespeare (its brilliant production of “Richard III” is playing in repertory) as well as Sondheim.  They milk the meaning out of each and every phrase and are skilled at rapidly spewing mouthfuls of words without losing comprehension, lesoning their devised rhythm, or compromising their dire intention.  This is a masterful production of Sondheim's dark and disturbing musical drama.

Great Lakes Theater’s SWEENEY TODD is a spell binding production of a Stephen Sondheim masterpiece.  Those turned off by violence, or who aren’t Sondheim aficionados, may not appreciate the show, but anyone interested in hearing complex music, well sung, encased in a well-honed script that is finely performed, will be turned on by this must see production.

Director Victoria Bussert draws lots of gore (as well as laughs) with a winking production that hypes the melodrama from the pulse quickening opening scene of a coffin oozing blood to the closing corpse-cluttered bloodbath that borrows a page out of "Hamlet."
More than a murderous tale of a deranged serial killer, Sweeney is an indictment of a soulless and corrupt society (19th century industrial London) of haves and have-nots in which the powerful suppress the powerless, a theme that resonates today.

Great Lakes Theater’s production of Sweeny Todd is “Broadway Worthy” on so many levels.  The combination of the exceptional sets, special effects, costuming, make-up, music, singing, comedy and acting makes you forget the grim nature of this tale and enjoy the show.  It is truly “a cut above.”

Christine Howey
Even with some small wrinkles, the propulsive energy of this production catapults you into this nightmare tale, timed perfectly for the Halloween season.

In director Victoria Bussert’s hands, "Sweeney Todd" has both a winking, pop-culture sensibility and the dark, discomfiting tinge of true madness. It’s not an easy line to walk, but Bussert and company do it, delivering a Grand Guignol extravaganza – and the results are bloody spectacular.