LILIES, the Revival of a Romantic Drama 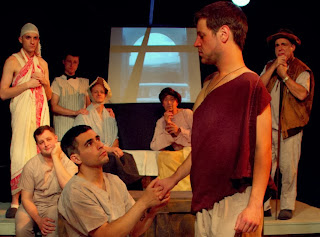 In its playbill for “Lilies, or the Revival of a Romantic Drama,” convergence-continuum asks its patrons to “deposit conventional thinking at the door, and join us in renouncing the real in favor of living the imaginable.”  This may be gilding the “Lilies” just a tad.  French Canadian Michel Marc Bouchard’s play is certainly an interesting piece of theater, and it is getting a very fine production in its Ohio premiere, but it is far from transformative art and requires leaving nothing at the door but one’s mainstream inhibitions.

LILIES is the type of script that should appeal to con-cons niche audience.  The production works well in the small intimate theatre and is nicely directed by Tyson Douglas Rand.