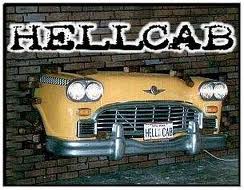 HELLCAB is a thought provoking, sometimes humorous glimpse into life in a big city which exposes the foibles and lives of people who use a cab as their means of transportation.  It’s na evening of impressive performances and well worth seeing.

Christine Howey
Written by Will Kern, the highly episodic show is a fast and furious ride through the numb-nuts, horndogs and wasteoids that wind up occupying one cabbie’s backseat on his Christmas Eve shift.

How the Hell (Cab) does Blank Canvas Theatre keep getting better? I don’t know the answer to that question, but I am drinking the Blank Canvas Kool-Aid! Hellcab is hilarious, well presented and moving!


"Hellcab" is a series of vignettes in the life of a beleaguered cabbie (Patrick Ciamacco) trying to be human while driving a Chicago cab at Christmastime.  Kern's fast-paced script delves into the most personal moments of Chicagoans when their guard is down.  The great comic timing in "Hellcab" is a testament to both Marc Moritz's skillful directing and the talents of a stellar cast, including Ciamacco, who learned his role in less than 48 hours.  The show is poignant and funny, while it touches on all number of social issues from race, class and ethnicity to mental health and family troubles.

To read Marjorie's other reviews, head to Marjorie Preston's blog.