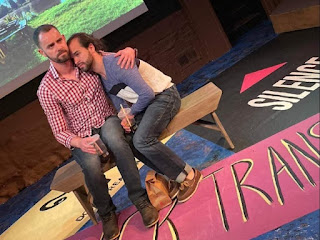 Con-cons cult audience will be pleased by the presence of lots of male partial nudity, a non-traditional story, and the gay theme.  Others will be intrigued by the author’s ability to lead down one path and throw a curveball into the action and then surprise with a startling ending.  All in all, even with some of the weak performances, this is a production worth seeing.

Right off the bat (which happens to be a murder weapon in this play) Convergence-Continuum should be thanked profusely for bringing more unique, unsettling and vital theatre to Cleveland.
That being said, "Angry Fags" is not without problems.
With a play that begins as "Boys in the  Band" and ends up as "Bonnie and Clyde" (albeit more perverse and dystopian), playwright Topher Payne  bites into a lot more political and philosophical meat than he can chew.
Although quite earnest and intent, the nonprofessional cast might be in over their heads -- as is director Scott Zolkowski, although he's to be commended for navigating so well through a tight budget in an even tighter performance space.
Despite its powerful moments, the production fails to remediate the discordant tonal problems of the script, much less hone in on the nuances (and humor) that would make underwritten characters compelling, or at least worth more empathy.

To see a full review of this show, read Howard Gollop's review here.