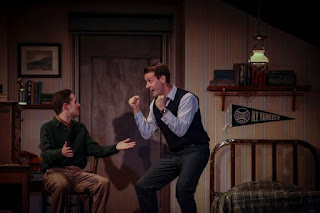 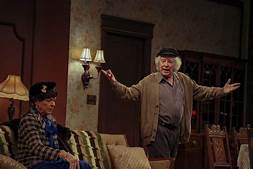 Serious with a humorous underbelly, Beck's BROADWAY BOUND is a perfect way to reenter the world of live theatre. The script is well written, the cast is outstanding, and except for the problems with the sound system, this is a special evening of theater.

But, once again, Austin Pendleton -- this time as the wily but cuddly commie with scatological one-liners -- dominates the show. His persona seems to be something of an elfin septuagenarian ragamuffin, and his almost chaotic delivery works as well here as it did when he starred as the destitute over-the-hill real estate salesman in Beck Center's "Glengarry Glen Ross."

Come to think of it, Pendleton is so right and original in this role, one might suspect it was his choice to put "Broadway Bound" on the Beck 2021-22 season in the first place. It's a feather in his cap, but Beck Center audiences reap the real benefit.

For the full review, link to
https://chroniclet.com/news/275835/beck-center-veteran-austin-pendleton-returns-for-neil-simons-broadway-bound/

One common factor that every one who sees this play will experience is the idea that it was written about their particular families. It is chock full of relatable experiences of people we have grown up with. While not as bone jarring as some productions it is more like sitting down to a dinner of comfort food and upon finishing the meal walking away very contented.

Neil Simon’s Broadway Bound opened the 2021-2022 theater season September 10 in the Beck Center for the Arts. Directed by William Roudebush, and staged in the updated Senney Theater, the drama/comedy draws from the author’s life. The story veers from family dynamics (did dad wet the bed again?) to life’s mundane details (is the pot roast hot?) to Simon’s efforts to be a writer (will I ever make it big?). It’s not a spoiler to say that he succeeded (Tony Award, Pulitzer Prize, Broadway shows, hit films), but it’s possible that the first success illustrated here proved to be his most exciting one.