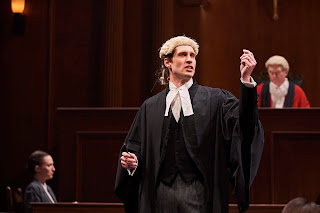 
Great Lakes Theater’s ‘Witness for the Prosecution’ a guilty pleasure.


To see a full review of this show, read Bob Abelman's blog here or go to www.clevelandjewishnews.com/columnists/bob_abelman/

Granted, it’s hard to adjust expectations of any stage incarnation if one is a fan of the near-classic 1958 Billy Wilder film version — with those indelible performances by Tyrone Power as the accused, Marlene Dietrich as his mysterious and enigmatic wife (as only Dietrich could be) and Charles Laughton as the loveably unlovable attorney. But the Charles Fee-directed Great Lakes company — particularly Aled Davies in the Laughton role — manage quite a feat of convincing British and German accents, controlled stature and modulated emotion.

The hardest role that an American actor can take is one that involves a British accent. Great Lakes Theater has done the nearly impossible by outfitting their actors with believable speech patterns that truly add to the story. This is a colossal show that if you are among the few who have never witnessed Agatha Christie’s Witness for the Prosecution in any form, you are in for a huge treat of suspense, drama and even comedy. The court is now in session...you be the judge.

BOTTOM LINE: An old-fashioned talky courtroom drama, well-executed by a good cast in both major and minor roles. The play itself, however, seems extremely sedate as written and so despite some rather well-done high drama that flares out all too briefly, I want more. To see a full review of this show, read Laura Kennelly's post here at Cool Cleveland.