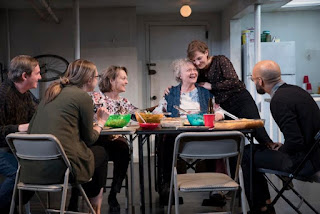 
There’s a wonderful cartoon by The New Yorker’s Bob Mankoff that depicts a corporate executive reporting to his board.  “And so,” he says, “while the end-of-the-world scenario will be rife with unimaginable horrors, we believe that the pre-end period will be filled with unprecedented opportunities for profit.”

Stephen Karam’s “The Humans” also calls attention to the admirable if highly irrational human tendency to be enterprising in the face of imminent demise.

To see a full review of this show, go to:

Key Bank subscribers may be thrown off by the fact that “The Humans’” is not a musical.  But it, like last season’s “The Curious Incident of the Dog in the Night,” and “War Horse,” the marvelous hit of several seasons ago, is a straight play that has special appeal.  Unlike those shows, it lacks the outstanding technical and special effects to grab and hold attention.  What it does have is a finely-written story that gets an outstanding performance that is well worth experiencing.

All six characters in the drama "The Humans" at Playhouse Square’s Connor Palace are flawed, disillusioned and broken.  The basic truth to this meticulously wrought, heartbreakingly realistic play by Stephen Karam is this: Who among us isn’t, in some way?

To see a full review of this show, read Kerry Clawson's review at  http://www.ohio.com/akron/entertainment.

The rich soulful song ("The Parting Glass") a centerpiece in Stephen Karam’s masterwork, is a grim reminder of the lost Irish soul of the family — not to mention lost hope, lost jobs, lost youth, lost health and lost romance.  It’s all uncovered in two acts of biting comedy, mournful pathos and chilling visual and audio imagery — the latter brilliantly conceived by director Joe Mantello in the deceptively realistic guise of a thunderously clumping upstairs neighbor, an ominous roar of a washing machine from an adjacent wall and bad lightbulbs and electric circuitry that provide punctuating blackouts.

For many this wincingly honest portrayal of family life will feel as if it is hitting too close to home but good theater is not always puppies and daffodils. If nothing else, by the end of the play you will realize that your family may not be as bad as you thought and could indeed be worthy of your affection…now if they could only do something to fix the sound system.

As amusing as the play often is, there is a forlorn melancholy at its heart that Edward Hopper would recognize. And it’s why The Humans will stay with you long after you leave the theater.

Holiday dinners should come with trigger warnings, at least according to Stephen Karam’s The Humans, the latest in the Broadway Series currently at Playhouse Square. In an intense, well-crafted (and compressed) drama centered on a Thanksgiving family reunion, the Blake family goes from “Happy to see  you” to “What has happened to us? What have we done?”

It is one of the most keenly observed depictions of the way we live now to unfold on the stage in years and captures, in 90, intermission-free minutes, the sum of our fears and desires, the twin emotions a very good therapist once told me, motivating each and every one of us.