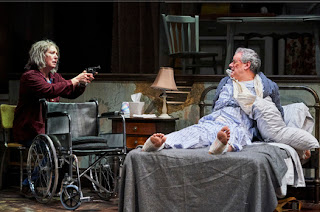 This play is dull and drowsy – two words rarely associated with Stephen King – and, to borrow from Annie’s limited but colorful vocabulary, this production is cockadoodie.

In spite of some technical issues, “Misery” is well worth seeing!  The acting is of the highest level and it’s nice to see Andrew May on a CLE stage once again.

This is the second time in consecutive years that the good folks at GLT have tried to turn a film thriller into a stage play, and lets hope they’ve gotten that urge out of their system.

Well played, Great Lakes Theater! Misery, Stephen King’s 1987 best-selling thriller, is anything but misery-inducing, thanks to William Goldman’s dramatic adaptation now playing at the Hanna Theatre. Bravo to Charles Fee’s insightful direction, the fine cast and some terrific special effects. Misery had opening night viewers wincing in sympathetic pain one minute, terrorized another and laughing in the next (yes, there’s humor there).


"Misery" murder holds our attention when the story takes us on a new journey. The audience becomes a fan as some people become a movie fan or a performer's fan.

Despite a fine cast, "Misery" just isn't very interesting as a play, the terror and tar-black comedy of both the book and film duller by its translation to live theater.