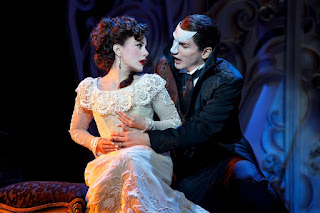 A lot has changed since the Phantom lurked under the Paris Opera House.
In Andrew Lloyd Webber’s "Love Never Dies," the sequel to the 1986 blockbuster "The Phantom of the Opera," the Phantom’s love for his muse Christine is no longer a one-sided obsession. Now, 10 years after the "Phantom" story, we see that a grown-up Christine is not just under this masked man’s music-making spell: She has loved him deeply.

It’s a bit dull and a tad strident; sometimes tacky and occasionally inspired; teetering on monotone and tottering on melodious; instantly forgettable and forever mesmerizing.


Well, what else would anyone expect from “Love Never Dies,” Andrew Lloyd Webber’s sequel to “The Phantom of the Opera?”

For the many people who witnessed the grandeur of the original Phantom of the Opera some may be in for a bit of disappointment. To their credit, this touring company manages to excel in all aspects of the performance using sheer will. Is it as good as Phantom? No, but few things are. Is it worth seeing? Definitely, due to this stellar cast.

Under the direction of Simon Phillips, the show is a misbegotten attempt to cash in on the popularity of the Phantom franchise. Too bad they didn’t follow their own advice as spelled out in “Why Does She Love Me?” That’s when Meg counsels Raoul, “You should have never come to America/It’s not a place for people like you and Christine.” Amen to that.