LAST OF THE BOYS @ NONE TOO FRAGILE 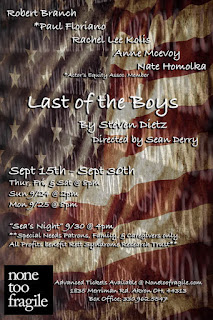 War is hell and, as highlighted in “Last of the Boys,” its aftermath is often worse.  Kudos to Sean Derry and his cast for creating a compelling evening of theater.  This is must see theater for anyone interested in fine acting and a more real than life picture of the outcomes of combative and emotional wars on human beings.

Prolific playwright Steven Dietz is a colorful writer who strikingly juxtaposes moments of grief and culpability with pointedly dark humor in "Last of the Boys." This heavy, haunted play is quite different material from his "Becky’s New Car," which was a romp in comparison at Actors’ Summit in 2011...

Even after all this time, the Vietnam War still stirs the emotions of those who lived through that revolutionary era. It was a time of active political revolt against an unpopular government. No matter what side you found yourself on, establishment or hippy, it defined an entire generation that carries those scars even to this day. This show is excellent viewing as well as a great way to begin a healing dialog between current fractured generations.

For those of us who lived through the Vietnam War as adults, there are ghosts aplenty.  And as the current documentary series on PBS shows, the interest in that doomed and lethal excursion never seems to wane. The feelings of loss and guilt, along with the excesses of governmental hubris, are real. This play touches some of those points, but undercuts its theme with too many conflicting elements.

The Viet Nam War shook this country, Viet Nam and most of the world.  Soldiers died and lives were destroyed.  The war didn’t end but goes on in memories.  Some of those memories are evoked by Steven Dietz (B. 1958) in his play “The Last of the Boys.”

To see a full review of this show, read David's posts at Westside Leader