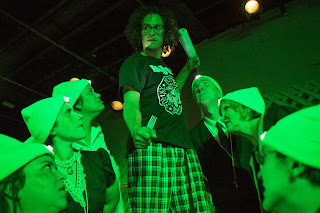 “Dying is easy,” said famed 1940s performer Edmund Gwenn on his deathbed.  “Comedy is hard.”   Tragifarcical absurdism may be even harder judging from convergence-continuum’s well-intended by ultimately ungainly production of Eugene Ionesco’s “Rhinoceros.”

The con-con production, under adept directing by Jonathan Wilhelm, is a very long sit, but can be worth the effort.  Don’t go expecting a clear plot with a nicely wrapped-up solution.  This is an absurd play which is intended to make you uncomfortable and forces you to be introspective and examine the world around you as you ask, “Why do we exist?”


If you think that “fake news” alt right and mass hysteria are new ideas…think again. Eugene Ionesco’s play Rhinoceros still strikes a chord 58 years later. Before seeing this work, make an effort to read some online synopses of the play in order to better understand its relativity to today’s headlines.

The subversive power of theater is that it can make us laugh in the face of real existential threats. And that laughter, with any luck, can turn into change. So it is worth paying attention to this convergence-continuum production of the often wordy Rhinoceros.