A SKULL IN CONNEMARA @ NONE TOO FRAGILE 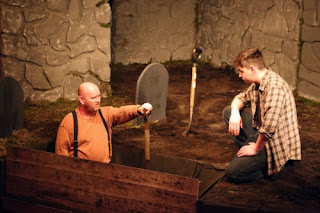 Partake in the free shot of Jamison, which is the hallmark of the pre-show ritual at none-too-fragile, sit back, and allow yourself to be immersed in an Irish black comedy, complete with skull battering, blunt language and a wee bit of fun.

If you like your theater with a heavy Irish brogue and freewheeling insults and cursing, this work that borders on sacrilegious is for you. The story and characters are engaging and the mystery holds up well to the very end. Have a jigger of Jamison on the house and enjoy a bit of Irish whimsy.

"A Skull In Connemara" is a sick play.  But this black comedy by Martin McDonagh sure is a funny one at None Too Fragile in Akron’s Merriman Valley. The Irish-English playwright is famous for his vicious but hilarious brand of humor, and Skull does not disappoint on that front.
.
To see a full review of this show, read Kerry Clawson's review here.

"A Skull in Connemara" has the most convoluted script produced by the none too fragile (NTF) theater in a long time.  The play is part comedy and part serious drama.