THIS IS NOT ABOUT MY DEAD DOG@ PLAYWRIGHTS LOCAL 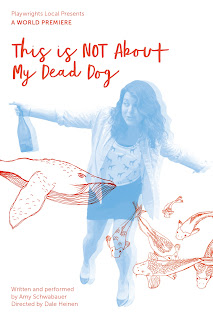 We’ve all had moments like those revealed by Amy Schwabauer and see ourselves in her embarrassment and angst.  But few of us are brave enough to put it on stage before an audience, bold or brilliant enough to perform it ourselves, and brazen enough to consider it theater.

The largely mid-twenties female sold-out audience responded well to the tales of self-loathing.  Some even shed tears at the end.  The stories obviously hit a chord with them.  Some adjustments in the script could expand the appeal to a wider audience and provide a better theatrical experience.

If you’re going to write a one-woman play that is largely about drinking and vomiting, it helps if you’re an engaging and at times electric actor. Thankfully, that’s what writer-performer Amy Schwabauer has going for her.