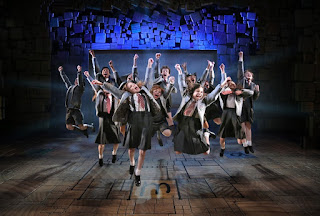 The touring production of MATILDA,THE MUSICAL follows the production and staging of the London and Broadway productions.  If only the sound system was better, the kids weren’t screeching in high pitched overly accented British pronunciation, and the orchestra didn’t drown out the speeches of the actors, maybe the results would have been better.  As is, MATILDA, THE MUSICAL, now on tour and housed at the State Theatre, is less than a wonderful theatrical experience.


Kerry Clawson
MATILDA THE MUSICAL is a witty, imaginative, wondrous show for all ages, now playing on national tour at Playhouse Square’s State Theatre.
Based on the beloved children’s novel by Roald Dahl, it is a brilliantly conceived, boldly painted fairy tale world whose infectious energy and joy have made it a worldwide phenomenon.
To see a full review of this show, read Kerry Clawson's review he

"Matilda: The Musical" ... is no sappy Disney show of the Great White Way but an import from the much edgier London West End.   And forget anything like a Leslie ("Willie Wonka") Bricusse score. Songs by Tim Minchin are rooted in a British pop-rock vernacular with a few classical gothic flourishes. His lyrics are sly and witty, like those of cabaret musical satirist -- most likely because he is one.  The biggest surprise is the comedic, singing, dancing and acrobatic talents of the show's true heavy  (in more ways than one) -- David Abeles. He plays the monstrous, allegedly female school principal and former hammer-throwing champion Miss Trunchbull, sporting an outfit  that can only be described as Victorian SS officer schoolmarm.


For fans of the book, this is a no brainer.  The entire family will love the show.  For those not familiar with the story it is still a well spent evening at the theater.  Tickets may become dear for this particular run.
To see a full review of this show, read Mark Horning's blog.

Christine Howey
When you were growing up, if you ever felt like an alien creature plopped into a foreign land, Matilda the Musical will take you back to that time with plenty of wit and some splashy stage effects. And that's a darn good way to revisit childhood.