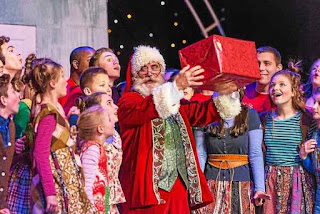 In short, this play is a mess, but the production of it is gorgeous.


To see a full review of this show, go to www.news-herald.com and type "Bob Abelman" on the search bar  or http://www.news-herald.com/general-news/20151209/theater-review-olmsted-performing-arts-kris-kringle-cringe-worthy

Though the intentions were pure, KRIS KRINGLE THE MUSICAL is not a polished product.  It is a script in process.  It needs cutting, reshaping and focusing in order for it to fill the void for a much needed holiday play for community and professional theaters.  The score needs to be reevaluated with the addition of some signature songs and a rousing finale. The staging, though showcasing excellent talent among the lead performers, was often visually chaotic due to an over-large cast and unfocused blocking. An excess of dance numbers, some of which did not advance the plot, slowed down the production and added unneeded time to the show.


This show is enjoying a world premiere here in Cleveland as it makes its way supposedly to Broadway but to get there it will need some major overhauling.  While everyone on stage is doing a masterful job, a smaller cast, simpler story, less songs that fit better would do wonders for the production.  In short it is a Christmas tree overloaded with ornaments that threatens to tip over.  Not a bad show per say but one in need of a strong rewrite.
To see a full review of this show, read Mark Horning's blog.

Does the world need a new Christmas stage musical? Hell, why not? The ones we have are getting a little shopworn about now. But does the world need a musical entertainment that, even with all its wonderful and heartfelt intentions, is the theatrical equivalent of The Island of Misfit Toys. Well, probably not.

But the greatest sin of this production -– one that has as much likelihood of heading to Broadway as a chubby fella coming down your chimney on Christmas Eve -– is that it's so laden with cliches and stock characters, it provokes no genuine emotion or joy. It doesn't take much to get us misty during the holidays but this "Kringle" manages to be as charming as rain on Dec. 25th.