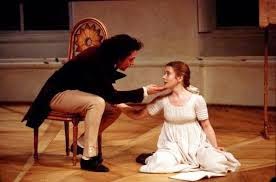 Extravagantly lengthy, opulently wordy and intellectually challenging, this play tests one’s endurance while this production of it – beautifully directed by Christine McBurney with particular attention given to the thread of frivolity that weaves its way through the script – makes the arduous journey well worth the while.

“Arcadia” is one of the English language’s great plays.  Tom Stoppard’s language is poetic and poignant.  His use of dichotomies is impressive. This is a play worth seeing and Mamai should be praised for selecting and staging the script.  That said, the almost three hour sit became frustrating as many lines could not be heard, echoes exceeded clarity, acting styles weren’t always consistent to their era. The theatre desperately needs to find another venue.  It’s a shame that their quality work and the efforts of the cast are spoiled by the blurring of the dialogue, which is the basis for understanding the playwright’s brilliant efforts.


With the new wall treatment lining the back wall, the effect of “Echo Theater” has been greatly reduced thus giving a very adequate cast the ability to project their lines without fear of reverberation.  In short it is a dramody that allows you to solve the mysteries by giving you enough clues to do so.  Good Theater and Good Fun.
To see a full review of this show, read Mark Horning's blog.

The talented Mamai cast delivers Stoppard’s brain-tickling words with musical rhythm and sly wit, under the direction of Christine McBurney.