MADE IN AMERICA @ Dobama 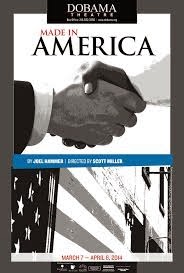 
"Made in America" is a poor man’s “Glengarry Glen Ross” – another dark comedy about salesmen, salesmanship, and the personal and professional cost of doing business. It lacks the depth, drive, and drama of David Mamet’s Pulitzer Prize and Tony Award-winning play and, while an interesting and cleverly constructed two-hander, it is not an engaging or satisfying one.

To see a full review of this show, read Bob Abelman's article in the Cleveland Jewish News here.

Dobama should be commended for going out on a limb by selecting a new play.  Unfortunately, MADE IN AMERICA is not a polished script and needed to be more completely tested to determine if it was audience ready.  Attendees will be rewarded by being the first to see the script in production, but should be aware that they are seeing a piece of theatrical writing in progress, which is given a competent production.


“Made In America” offers an intense evening of drama that slowly builds to a crescendo.  It magnifies the seamier side of capitalism as well as the human condition.  After the well played set up with the first act, the second act surprises you with a series of plot twists that will delight and satisfy.

Even with one glitch and one major problem, there is much to admire and enjoy in Made in America. And, you know, it’s about a salesperson! So cool.