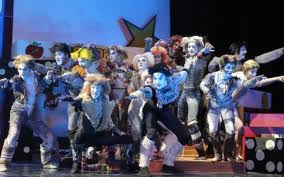 “Cats” devotees justify their fervor by mentioning the show’s seven Tony Awards, including Best Musical, and its impressive literary and musical pedigree.  Detractors simply call attention to the fact that… this is a play about cats.  They both have a point, yet there are aspects of the Mercury Summer Stock production about which groupees and grousers can agree.