THE MYSTERY OF LOVE AND SEX @ DOBAMA THEATRE 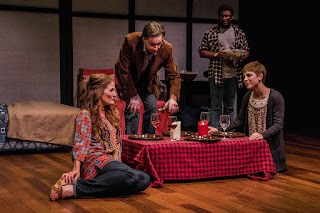 
This play is familiar familial territory for the playwright, whose modern-day dramedy “Kin” – which played at Dobama in 2014 – similarly explored the intimate relationships of its characters in order to unlock the mystery of who they really are.  But this production of “Mystery of Love & Sex” is less successful.  The reason is that each actor seems to be performing in a fundamentally different play rather than finding what it takes to blend into this one.

The Mystery of Love and Sex is one of those special scripts that will appeal to the Dobama audience who come to see contemporary professional scripts which look at society and its strengths and foibles.  Bathsheba Doran’s play gets a strong production that should delight and enlighten and deserves strong support.  It’s a “go see!”

“The Mystery of Love and Sex” pushes the envelope of Cleveland Theater with its portrayal of strong social themes that include inter-racial relationships, inter-religious relationships, sex, gay lifestyles and gay marriage.  Those with a liberal bent will enjoy it while others may find it less fulfilling due to its mature nature.  As Lucinda would put it, “It’s so bohemian.”

Where’s Bill Nye the Science Guy when you need him? Maybe he could explain how you get four actors on stage talking about sex, with some full frontal nudity, and have absolutely no chemical reaction among any of them.

Characters talk about truth throughout the play – "You wanna know the truth, you have to ask the right questions," Howard, a writer of detective fiction, proclaims – but rarely convince us they are living it.