ALL THE WAY @ CLEVELAND PLAY HOUSE 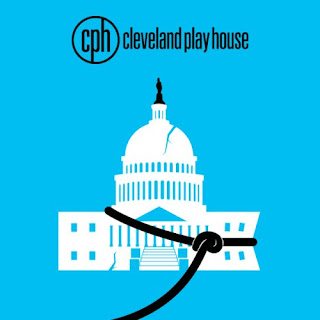 
Richard II.  Edward III.  Henry VIII.  LBJ.  These famous  figures – with their larger-than-life personalities, excessive appetites, unfillable holes in their egos, and Rabelaisian crudity – are the focus of historical dramas.  And Robert Schenkkan's Tony Award-winning “All the Way” is no less Elizabethan, no less epic and no less theatrical than those penned by William Shakespeare or Christopher Marlowe.

ALL THE WAY is a well-written script that gets a strong production at Cleveland Play House.  In spite of some sound projection problems, the cast develops their characters and the themes of the play so well that anyone interested in good theatre and political history should be captivated.

Reading more like a Shakespearean tragedy than a political historical drama we gain insight into President Johnson and the conflicts that made him what he was.  Deeply flawed and ultimately challenged with making lasting changes to better his country he was a man driven to set things right.  This show is as close a representation as you will ever find of the author of “The Great Society.”  It is a fast moving and gripping drama well worth seeing.

It’s political “Whack-A-Mole” as Johnson placates, grovels and bulldozes such legendary American figures as Martin Luther King Jr., J. Edgar Hoover and Gov. George Wallace, not to mention his wife Lady Bird. Yet the Cleveland Play House production of “All the Way” (an allusion to the campaign slogan “All the Way with LBJ”) makes Robert Schenkkan’s incisive play as thrilling as it is exhaustive.

Lyndon Baines Johnson was one of the more fascinating characters to ever populate the halls of Washington D.C., since he combined the raw, crotch-grabbing energy of a good ol’ boy from rural Texas with the liberal leanings of a man who deeply cared about the disadvantaged. Try finding a mixture like that in today’s polarized political landscape.

Steve Vinovich struts the stage as LBJ.  Vinovich threatens, shouts and barks to get his way.  He can out curse anyone I know – and, often he does it at the top of his voice. His LBJ knows where many of the skeletons are hidden in the nation’s capital and is not afraid to open those doors to gain his way and will. Vinovich was excellent as LBJ.  He understudied the Johnson role on Broadway when Bryan Cranston played LBJ.

Not only does the Cleveland Play House producdtion of "All the Way" hold up without Cranston, it shots out the lights, as LBJs compatriots in his home state of Texas might say with a potent combination of topicality, smart staging and Steve Vinovich at the helm of as the 36th preident of the United States. . . . Great performances, like momentous elections, don't come around every day.  Don't sit this one out.