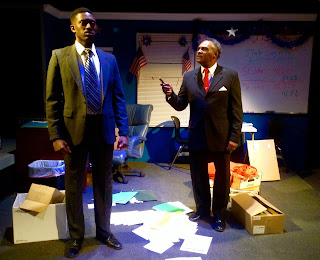 The Bloodless Jungle presents an interesting political concept.  The surprise ending adds a nice touch of realism, saving the show from being a television soap opera.  This is a script in process which needs shortening and the addition of more humor and drama.  Interested in the political process and the behind the scenes machinations?  If so, you might enjoy this production.


With the fertilizer factories in full swing this election year, The Bloodless Jungle brings a refreshing behind the scenes look at the political process.  It is a story of true friendship, good moral values and dedication to make the world a better place…in other words a work of fiction.  Well worth the effort to see this one.

Sometimes, the title of a play inadvertently captures its essence. And that is the case here, in a play that seems drained of its blood, and guts, in exchange for soft soap and pablum.